The struggle part of the story is essential. - ⚡️Kristen Kalp 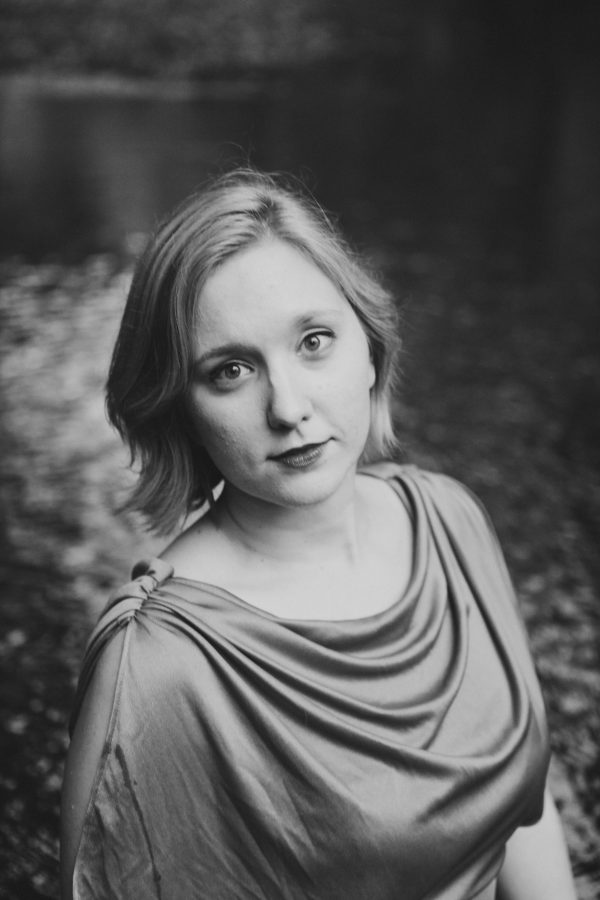 When I was a part of a mastermind group a few years ago, the most interesting parts of the experience started with the words “I don’t want you to know that…”

When the women in the group were hiding bits or pieces, saying everything was “fine,” or being relentlessly cheery about their not-so-cheery bits, they were invited to complete that sentence.  Ooooooof.

That sentence opens up a whole can of crazy shit.  People immediately tell the big scary truth and freak out and almost instantaneously start to cry.  Hard.  It’s more like a sob-hurl that nearly leads to actual hurling.  So, peeps?

I don’t want you to know that…

Read the biographies of any entrepreneurs these days — whether in book form or just on their current websites — and you’ll see a common thread play out.

There’s a struggle that the person overcomes: losing 100 pounds, losing love, finding love, beating their addiction, or making their first million after a decade of trying. Big wins, small wins — all WINS writ large across the bio.

Struggle is central to any good story. There are no comic book heroes without villains; no Harry Potter without Voldemort.

Only, what if you’re not to that part of your own story yet?

What if you’re right in the middle of the most horrible, excruciating part of that journey to Awesomeland that you’ll get to include in your own bio someday?

Oh, hi. That’s exactly where I am.

And nobody talks about this part — the terrible, horrible struggle-y bits that feel like swimming through unrelenting sludge.

I don’t want you to know that this isn’t working at the moment.  Last summer, I had the best idea ever: a summer camp for entrepreneurs to get together and meet in person and put their fucking phones down and learn about doing business with more soul. It would be called Brand Camp, and I’d also load it up with extra special classes to help the peeps who sign up get through the months leading up to camp.

In my head, it was Kumbaya — s’mores around the campfire, genius conversations, deep belly laughs, blankets of stars overhead, and every business owner present leaving with a boatload of genius plans and heart uplifting energy.

I took the gamble. I signed the contracts, I got myself the speakers, and I started planning my big giant marketing plan.

I dropped over five grand on videos for the Double Your Fun dare. It was (obviously) supposed to go viral. I don’t want you to know that it basically tanked.

The cart opened and we sold…lemme be honest and look up the precise number…58 spots.

There’s room for 600 at camp, and the break-even point is waaaaaaaaaaaay beyond the number 58, so I opened the cart again in December.

So, I figured clearly I wasn’t doing enough to serve my people best. Okay, right. I can do this. I can serve the shit out of you! Just watch!

I went ahead and wrote a book in December. It’s Go Your Own Way: free yourself from business as usual. It’s sold over 754 copies, each one of which donated to Flying Kites orphanage in Kenya. It’s laced with references to Brand Camp and to all the goodness that entails.

I also decided to hold live classes laced with brilliance to get my peeps making Mo’Money and Mo’Meaning in their businesses this year. The feedback was phenomenal — people laughed, they cried, they had revelations and a’ha’s.

I don’t want you to know that this wave of love and support and just plain earth-shattering revelation sold…3 spots.

There are currently many, many e-mails in my inbox telling me how excited peeps are for next year’s camp. And how they would love to come this year but they’ll try to make it work next year. And how they’re still thinking about whether they can come next year.

Only there is no next year.

Based on sales so far, we’re too far in to refund tickets and not far enough to make a dime. (Or even keep from losing about 500,000 dimes, give or take.) So we’re keeping on. Just like in the awkward photo of me over there.

I don’t want you to know that this is happening.  This is the part no one tells you about when you are only allowed to see the gloss, the hype, and the happy endings.

Business is a gamble, and sometimes you’re losing. You haven’t yet won or lost definitively, but you’re currently losing.

You can’t possibly know what the next roll of the dice will hold, but you know a few things for sure:

No one in the history of selling things has been more off the mark than you are right now.
NO ONE.
You’ve never felt so alone.
You’ve never released a product you’ve been so proud of — and it’s never received such a poor response.
You wake up every morning wanting to just crawl back into bed.
You can’t believe you thought this would work.

Which leads to the things you’re pretty sure you know for sure, ’cause your mind keeps ’em coming at you:

You’re a failure.
You should give up.
You should just stop this whole business and become a…nun…or something.
Because nuns have no stress and get to live in a cloister, which is pretty much the best-sounding thing you can imagine at the moment.
No one cares about what you have to say or what you have to offer.
You were way off the mark when you made this shit.

I don’t want you to know that at this moment, I think I’m a failure. I should give up. I should just stop this whole business and become a…nun….or something.

If you’ve ever felt this miserable as a result of your business — if this is the part of the story you’re living right now — know that you’re not alone.

This being in business thing celebrates the victors, the champions, and the transformations. The $100 billion dollar buyouts and the overnight successes. The startups that go from nothing to rolling in dough in six months. And the press tells those stories over and over and over again.

Interviews focus on those struggles in hindsight. No one in the midst of struggling the fucking bear to the ground pauses to say: this is a tough string of days. This is ten times harder than I anticipated. Maybe there’s victory ahead, maybe there isn’t. But I’m not living that part of the story right now.

And for those of you who are also not living the victorious part of the story right now — I’m right there with you. No gloss, no hype, no shine.

This part of the story is struggle.  It’s essential.  It’s the part where you learn shit, find out who you are, and double down on putting your money where your mouth is — but it’s also painful and difficult.  (And of course, I don’t want you to know THAT.)

P.S.  You should probably give up. <–This is where I tell you exactly what happened at Brand Camp!  IT’S A DOOZY. 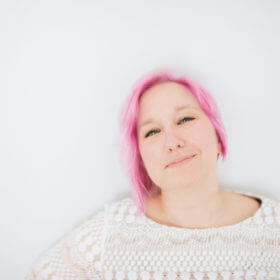 I weigh *** pounds (and other truths about working from home) 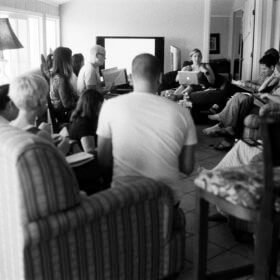 Battling depression + running a business = holy crap, this is scary to share